How to Grow Tomatoes

Learn how to grow tomatoes in a hot country like Cyprus. 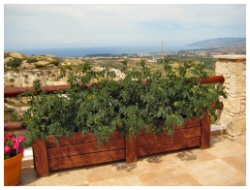 Cherry tomatoes on my roof garden

I'm not exactly a gardening expert, but I have learned a few things about growing vegetables in the 15 years I've lived in Cyprus.

You would think that tomatoes would be easy to grow; after all, there's plenty of heat on the island, so as long as you plant your tomato seedlings or plug plants in good quality compost, you just water them and sit back to wait for the crop, right?

Well, I tried to grow the big juicy tomatoes common to every Cypriot salad for 2 years in a row. While I religiously watered them every day, and twice per day in the intense heat of July and August, they always got what is known as blossom rot, where the bottom half of the tomato goes brown and becomes shrivelled.

I checked in my UK gardening guide book for instructions on how to grow tomatoes and figured out that I wasn't watering my poor tomatoes correctly; what they really needed was a constant drip-feed and spray system, as opposed to twice daily watering "en masse" with a watering can.

Tip:: This is why most tomatoes are grown commercially under huge cloches, so the sun doesn't blitz them and the spray watering system is contained within the poly tunnel.

The third year, I switched to growing tomatoes in pots and tried both the big tomato variety and also tiny cherry tomatoes. And while the big ones had the same old problem, the cherry tomatoes didn't get any brown spots at all! 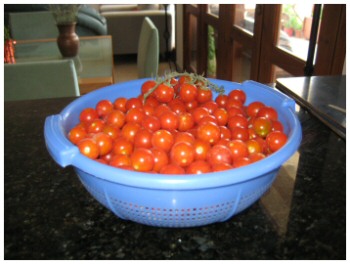 My crop of cherry tomatoes

Last year I forgot about the big tomatoes and focussed on growing cherry tomatoes only and this bowl is just ONE of many I picked throughtout the season. My husband made me some huge wooden planters for chillies and tomatoes and the production line started.

In fact I had so many when the first main crop ripened, I didn't know what to do with that many cherry tomatoes every day.

Here's how to grow tomatoes like these every time - the picture at the top of the page is THIS year's crop, planted at the end of March, so my tried and trusted method has worked! 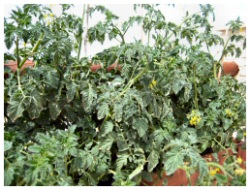 Tip:: When the plants start to go brown in the intense summer sun, cut them back, pull the roots out and turn the soil over. Some tomato seeds will have fallen into the earth and if you start to water again in September when it's still hot, you will have more tomatoes growing in a matter of days.

January 2020 Update - I just picked another 2kg of tomatoes, from my winter crop. Even though the winter months are far cooler, the sun ripens the fruit and they taste wonderful.

So now you know how to grow tomatoes in Cyprus. And don't forget, if you get hundreds of cherry tomatoes at the same time, just dry them in the sun and preserve them in olive oil with a few herbs as I did last year- the result is perfect sun-dried tomatoes!

Plus, once you get confident, you can try ordering different colored varieties of cherry tomatoes like yellow and purple ones from online nurseries :)

Back to Cyprus Gardening from How to Grow Tomatoes

Back to Cyprus Travel Secrets from How to Grow Tomatoes