What to see and do on holidays to North Cyprus

The Turkish Republic of Northern Cyprus (TRNC) is a separate part of Cyprus which has been occupied by the Turks since the invasion in 1974. It is NOT officially recognised as a state by any other country in the world, including the Republic of (Southern) Cyprus. It is the only country in Europe with a divided capital.

Discover Northern Cyprus hidden history on a SINGLES holiday with Just You!

Beacuse of the Cyprus "problem" being a divided island, holidaymakers who want to visit North Cyprus must either fly via Turkey into Ercan airport in the North (you cannot fly into Ercan airport from any country other than Turkey) OR fly into Larnaca or Paphos in the officially recognised Republic of Cyprus in the South and then cross the border into the North.

Please note that while I refer to North Cyprus for ease, it should really be called the TRNC in every instance; it's just that most people without a clear understanding of Cyprus history simply call it North Cyprus.

Holidays to North Cyprus aka the TRNC

Most people visiting North Cyprus head for Kyrenia or Girne as it is called in the TRNC.
It has a beautiful old harbour and narrow old-fashioned streets, but sadly massive development over the past few years on the hillsides surrounding Girne has largely ruined the areas around the town as you can see in this picture.

Key attractions to put on your list for holidays in Northern Cyprus include:

Getting to North Cyprus

Holiday companies in the UK advertising holidays to North Cyprus don't make it obvious that you have to fly either via Larnaca or Turkey. The reason you can't get a direct flight to Ercan airport in the TRNC is because the TRNC is only recognised by Turkey.

Since 2004 when Cyprus joined the EU, however, border controls have been softened so it is now easy to cross over into the North at one of the many check-points which now includes the latest crossing in the north west at Limnitis (closest town in the South is Kato Pyrgos).

Those living in the South or visiting the South can cross over by showing a passport, filling in a simple white slip (which gets stamped rather than your passport) and buying car insurance at the border.

NB: Most hire car companies will not allow you to take their cars over and while some have loosened their strict rules, if you do have an accident, I suspect that you may be held fully liable for damage as you can only buy Third Party insurance at the border.

These tips for visiting Northern Cyprus are useful for expats living in the South as well as tourists. 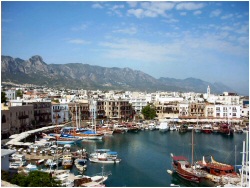 Travelling time from Larnaca airport to Kyrenia, the main resort in the North, is around 1 hour 30 mins, including time taken to cross the border at Nicosia. Some websites claim it only takes 45 minutes...yes but only if travelling at the speed of light!

While many holidays to north cyprus companies say you can fly direct into Ercan airport in the North, this can only be done by landing in Turkey FIRST! The alternative is to fly into Larnaca and take a bus or taxi across the border or just ensure your holiday package includes this transfer; the time difference between that and landing/taking off from Turkey is about the same.

Or you can get a ferry from the Turkish mainland to Kyrenia.

Once in North Cyprus. the best way to get around is by hire car, although taxis are cheaper than in the South so if just wanting to get to and from the airport, taxis may be your cheapest option.

NB: Mobile phones using sim cards from South Cyprus do NOT work in the North unless close to the border.

When you cross over, be sure to change the service provider setting on your phone to manual; if you leave it on automatic, the phone will continually search for a provider but as you're not allowed to connect to Turkcell, all that will happen is your battery runs flat!

Enjoy your holidays to North Cyprus!

Discover the history of North Cyprus and visit the beautiful unspoilt Karpas peninsula, Kyrenia and Famagusta, not to mention the amazing mountain ranges, St Hilarion castle and the stunning beaches and deep blue water of the Mediterranean with this SINGLES holiday from Just You!

Travel from North to South Cyprus without a car