Find out the locations of Cyprus border crossings and what to look out for when driving in North Cyprus.

Here are the 7 border crossings in Cyprus:

They are open 24 hours a day and you can cross as many times as you like.

In order to cross the border, you will need your passport and car insurance. You have to buy car insurance at the border where there is a separate office from the immigration desks that process the passport paperwork.

Allow 5-10 minutes (depending on the queue) to fill in a white piece of paper with your name and passport number. This paper is then stamped and NOT your passport and the details punched into a computer to record that you have crossed the border. You must also show your insurance document or you won't be allowed to cross.

When you return (which can be through any of the crossings), show your passport and the white piece of paper again so the computer records can be updated.

If you are going shopping in North Cyprus and buy lots of cheap goods, you may get stopped and have to pay money to get your goods across (there is supposed to be a limit of around €85 worth of goods) - it depends on which policemen are at the border! 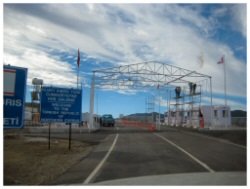 Driving in North Cyprus is much the same as in the South as you drive on the left and there are some good roads like the main two-lane motorway that stretches almost the width of the North from Morphous/Guzelyurt in the west to Famagusta in the east. There is also a fast section of motorway linking Nicosia to Kyrenia.

Visitors, especially those using the Cyprus border crossings just for the day do need to be careful, however, and take note of the following:

So have fun using the Cyprus border crossings and remember that you need to take out car insurance, without which you can't get across the border. Car insurance is only third party and can be taken out for 1 day, 1 month, 6 months or 12 months.

Back to North Cyprus from Cyprus Border Crossings