Find the best Cyprus tours to magical destinations like Jordan and Israel, just a short journey from the island. Ryanair now has a hub at Paphos airport and offers great value fares to Jordan and Tel Aviv 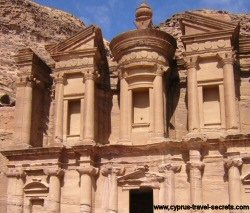 If you are planning an extended stay in Cyprus then why not take advantage of the island's proximity to exciting destinations in the Middle East.

There are many options for Cyprus tours to other countries like Jordan, Egypt and Israel and, because Cyprus is situated only a short plane journey away, they are easily accessible.

OK, if you only have a week to spend on the island, maybe time is a little tight, but for those with more time, especially, the lucky ones like us who LIVE on the island, why not see what one of these Cyprus tours could offer...

How about visiting magical Jordan to see where Indiana Jones made his last crusade?

That wonderful scene where Indiana and his dad ride on horseback through a steep sided gorge to enter an enormous carved temple was filmed in Petra, one of the MUST-SEE sites in Jordan. The gorge is called the Siq and the temple is known as the Treasury.

We recently took advantage of the new Ryanair flight from Paphos to Amman to explore Jordan on a 5 night mini-break. Jordan literally took our breath away, so much so that I have written a whole page on the best things to do in Jordan on a short trip and give recommendations on how to plan your trip to Jordan if you have limited time.

Tip: Amman, Jordan's capital, is only 45 minutes away from Paphos by plane...It's a great destination for a long weekend and is really quite magical. The band Coldplay chose the spectacular Citadel in Amman to live-stream their latest album Everyday Life.

Also accessible by a short plane trip or an overnight ferry is mystical and mesmerising Egypt, a country which, for my part, left me quite breathless at the sheer scale of what the ancient Egyptians built when I visited many years ago. I really felt very small when standing next to giant statues or amazing structures like the Sphinx.

Cairo is the home of the pyramids or you can head for Luxor (for the Tombs of the Kings) or go diving in the Red Sea at Sharm el Sheik or Hurghada. Or how about a mini cruise down the Nile?

You can get some great deals on Cyprus tours to Egypt - just pop into any local travel agent in Cyprus or look for adverts in the local newspapers.

By the way, did you know that you can do all sorts of other amazing things whilst on holiday in Egypt?

You can even learn Arabic if you fancy an alternative type of holiday!

Tours from Cyprus to other Destinations

Other destinations for Cyprus tours that are possible, some of which are still on my must-do list include Lebanon and Israel. Cyprus food is heavily influenced by the arab delicacies found in these countries so why not go and see them for yourself.

You can fly to both Tel Aviv in Israel and to Beirut in the Lebanon from Paphos airport with Ryanair.

Hummus, for example, while popular in Cyprus and served in most meze dishes, is very different in Israel in both texture and taste. See my page on Tel Aviv for the best way to make Hummus or check out this fantastic book by the Hummus Brothers - for lots of way to eat your favourite hummus.

Back to Cyprus Travel Secrets Home from Cyprus Tours