Planning to do some Cyprus driving? Read my tips before you get in your Cyprus hire car. 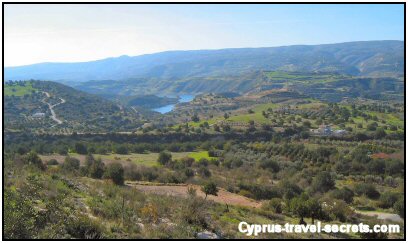 Be especially careful when you leave the airport after picking up your hire car. We have seen so many accidents where people forget about driving on the left and turn into oncoming traffic. Ouch!

Tip 2: Make sure you carry your driving licence and a copy of your insurance with you. The police now have a policy of stopping ANY car at random. Prior to joining the EU, they only used to stop Cypriot vehicles but ANY European driver is now a target for:

NB: Speed limit signs are in KILOMETRES and NOT miles per hour. Be especially careful when driving through villages on main roads.

Expect an on-the-spot immediate fine. You will, of course, see almost every Cypriot driving with one hand on the steering wheel and the other holding their mobile phone...

Be careful not to park on any yellow lines...even though all the Cypriots do. The police DO issue tickets to them too!

Tip: Need some ideas on scenic driving routes? Lots of my visitors have been buying Cyprus: Car Tours and Walks (Landscapes)

which also has some useful walking routes.

Tip 3: All foreigners on the island say that Cypriots are the worst drivers in Europe! This is mainly because they never LOOK before pulling out of a junction or before overtaking. My advice is to ALWAYS assume they will pull out in front of you and WAIT until they have gone!

This holds true, by the way, for any driver who lives on the island. Once you have lived here for a while, you tend to drive the same way everyone else does!

Tip 4: Most petrol stations in Cyprus have 24 hour pumps, but SOME older machines only take an old forms of money (Cypriot pounds), so make sure you have your credit card with you.

Many machines can also be tricky to work and you can find yourself scratching your head, wondering how to get your money in the machine or trying to work out how to get petrol out of the pump!

If you do "lose" your cash, make a note of the time and return to the petrol station the following day where you wil be able to get a refund as all money transactions are recorded.

Tip 5: Cyprus driving has been made much easier in the last few years through major improvements to most roads on the island. But beware of going onto roads marked in YELLOW on the tourist maps. These are often part tarmac, part dirt road...and you often don't discover the dirt road section until you have gone halfway to your chosen destination!

It all adds to the FUN of driving in Cyprus but you might wish you had hired a 4x4 vehicle! 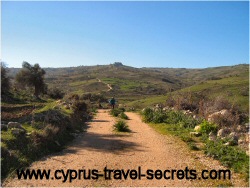 By the way, have you ever wondered why there are so many PICK-UP TRUCKS on the island?

Pick-ups are classed as AGRICULTURAL vehicles, so you do not have to pay duty on them when buying a new vehicle.

Commonly known as "double cabs", they are MUCH CHEAPER than the equivalent vehicle with a closed in "rear end". This is why so many foreigners who move to the island end up buying a pick-up truck. So now you know!

How to book Cyprus car hire at a great price

Take a wine tour by car

Back to Cyprus Car Hire from Cyprus Driving