Air travel to Cyprus is easy with direct flights from most countries in Europe.

Find a cheap flight to Cyprus with just one click

Over 50% of visitors to the island come from the UK and the island is also very popular with German, Russian and Dutch tourists.

While flying to the island from other continents is a little more difficult as it will mean a change of flights, please don't let that small fact put you off.

The best kept travel secrets are always worth going that extra mile (or flight for...!)

A taste of what awaits you in magical Cyprus :)

When we moved to Cyprus 16 years ago, there were very few cheap flights available. You just couldn't find many air travel deals with low cost airlines for really cheap flights to Cyprus.

But that all changed when EASYJET took over GB Airways in 2008. Easyjet now operate regular flights into Paphos from several UK airports including Gatwick, Manchester and Bristol starting from as little as £34.99. They also fly into Larnaca and have been so successful with their routes that other airlines have been forced to bring down prices so do search around to get the best price.

Ryanair also now fly to the island with 4 routes from Larnaca and, from April 2012, they have had a base in Paphos airport flying to 14 different destinations including London Stanstead.

While air travel to Cyprus during 2020 has been severely affected by the Coronavirus pandemic, both Easyjet and Ryanair have been so successful with their flights to and from Cyprus, low cost flights are here to stay even if it will take some time for airlines to recover from Covid-19.

Tip: Use the search box below to quickly find the best flight deal.

There are also plenty of charter flights for your luxury Cyprus holidays all year round as well as many scheduled flights from all over Europe where you can often get great cheap airplane flights.

British Airways, for example, is sometimes cheaper than many of the charter airlines, especially if you book well ahead.

You can also fly to Cyprus from the Middle East, several North African destinations and there are also some transatlantic flights to the island.

If you are travelling from the Americas or the Far East, it is best to book your air travel via London or one of the other major European hub airports eg. Rome or Vienna.

Athens is also a good option, even for British travellers wishing to find very cheap flights to Cyprus. Get one of the cheap flights to Athens from Easyjet or Ryanair then a low cost flight from Athens direct to Cyprus!

Prices for air travel vary considerably depending on when you travel and when you book. It's a good idea to compare flights to Cyprus to get the best deal. Even in the cheapest months, you can expect to pay at least GBP £100 for a return flight from the UK.

Tip: If you want to do a quick search for available flights from multiple airlines in one go, why not use a price comparison website like Skyscanner? Much quicker than visiting each airline's website individually, especially when prices often increase if you keep each airline's flight page open while searching around for other deals.

Cost of Flights to Cyprus

NB: Many British people think that air travel to Cyprus is too expensive.

Flights to Spain, for example, can often be obtained for well under £50. BUT, those same people forget that Cyprus is MUCH further from the UK than Spain AND the winter climate is far warmer here, purely because of Cyprus' proximity to the Middle East.

Wouldn't you prefer to pay a little more for guaranteed sunshine? 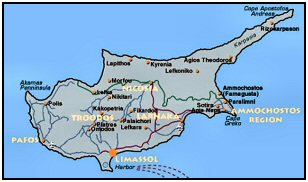 There are 2 international airports for air travel to Cyprus on the South of the island - Paphos and Larnaca.

Of the Cyprus airports, Paphos airport, in the west, deals mainly with charter flights and low-cost holiday flights, whereas Larnaca airport, in the east, has both charter and a wide variety of scheduled flights.

There are roughly 5 x more flights per year into Larnaca airport than Paphos.

Ercan airport, on the North of the island is only served by flights originating from Turkey. You can visit the Turkish controlled north of the island, but if you want direct air travel to Cyprus (north), you will have to fly via Larnaca or fly there via Turkey.

There are, of course, other ways of getting to Cyprus, (ferries, for example, arrive at the port of Limassol from Greece*, Israel and Egypt) though it takes far longer!

*NB - The old Greece to Cyprus ferry stopped running several years back, but there is a plan to restart the route from 2021, Covid-19 permitting!

Back to Cyprus Travel Secrets Home from Air Travel to Cyprus