Reservoirs all over the island have overflowed this year (2012) to water Cyprus properly for the first time in many years. And as locals flock to the dam walls, celebrations have been in full swing since the first reservoir overflowed in early February. 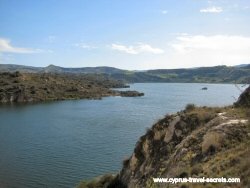 As I write, 9 of the island's 18 reservoirs are currently full to overflowing, including the second largest, the Asprokremmos outside Paphos, and the Evretou, the third largest dam situated close to where I live just outside Polis.

Even the major reservoir on the island, the Kouris near Limassol, which can hold 40% of the island's total reservoir capacity, is 80% full. When you think that just a few years ago, that same reservoir had less than 5% and the floor was cracked and parched through sheer lack of rainfall, this amount of water is certainly something to celebrate. 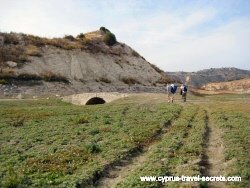 The pictures on this page show our local reservoir, the Evretou, completely full, yet back in November 2009, it was virtually empty. So empty in fact that a hidden Venetian bridge appeared miraculously in the middle of it, as you can see in this picture which shows a group of us walking on the floor of the reservoir.

With 20 metres of water normally swirling above the bridge, it felt a little weird walking over it; I just hope we will never see the bridge again anytime soon as that will mean more Cyprus water shortages!

Tip: While winter-time in Cyprus can be unpredictable in terms of rainfall, the landscape is SO different when everything is lush and green after the rains - a great time to visit! 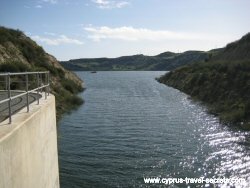 Celebrations to thank the mythical water gods for so much rain this year have extended beyond locals setting up stalls on the dam walls near the various reservoirs. With the first Bank Holiday of the season approaching, Green Monday and kite flying day, many villages are organising carnival days with fancy dress parties and lots of food.

I've never known them celebrate before Green Monday itself, so these early "festivals" are most definitely a result of the overflowing reservoir water Cyprus!

Tip: If you want to know why everyone flies kites on Green Monday here in Cyprus, see my kite flying page.

Back to Cyprus Facts from Water Cyprus