A good Cyprus map is a must-have if you want to explore this beautiful island.

When we arrived on the island back in 2005, there were few decent maps available to buy in the shops and Google Maps and Smartphones did not exist! 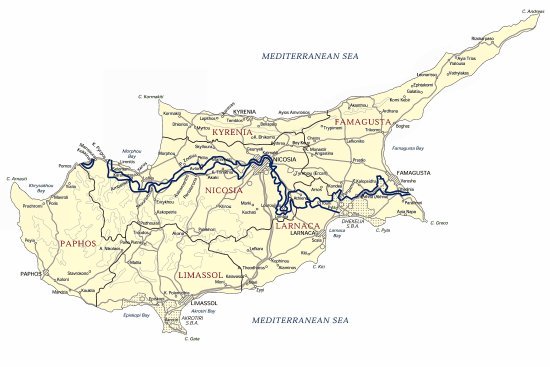 As we started to explore the island, we bought several versions of a Cyprus map, some good (clear and easy to read), some bad (hard to read and poor scale) and some that were VERY out of date with some roads and tracks that no longer existed! 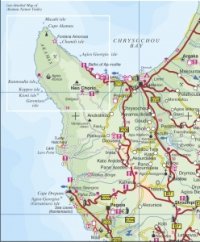 But one map we DID use a lot was the SELAS brand made in Nicosia, Cyprus.

The paper maps they offered back then were clear and easy to read and, more importantly they were ACCURATE.

As a Cyprus map based company, their maps were regularly updated, so as the old dirt-track roads were turned into proper tarmac roads, they updated their maps accordingly.

So while you can buy a decent map like the one from National Geographic...

Tip:...I recommend you also buy one of the Selas maps from a store in Cyprus if you need a printed map rather than having to rely on Google maps or other app on your smartphone.

Tips for Choosing a Cyprus Map

Tip 1: The CTO (Cyprus Tourism Office) offices across the island have FREE maps of both the whole island and the major towns (Lefkosia, Larnaca, Lemesos, Paphos and Polis).

In my view, these are as good, if not better, than most other maps of Cyprus you can buy, particularly if you want to see a town or an area in detail. For a FREE version of the Dept of Lands and Surveys map of Paphos, for example, CLICK here:

The map will appear blurred but just click on an area of the map and the detail will be revealed.

The link above takes you to the OLD Paphos map that the CTO office used to give out. It has now been updated and sadly, most of the contour lines have been removed along with most of the tracks and off-road trails most useful to walkers and cyclists!

Tip 2: There is no OS (Ordnance survey) standard map of Cyprus available at a scale of 1:25000 or 1:50000. While they do exist, they are only available via the military bases or you may find someone who has a copy!

So if you are a walker or cyclist and need a more detailed map of Cyprus, for example showing accurate contour lines, you will be disappointed. That's why for walking or cycling, I recommend the FREE CTO maps I mentioned above. You can find links to these FREE Cyprus maps for each district in Cyprus below:

Tip 3: If you are planning to venture off the main roads, be advised that the yellow "tracks" shown on the free CTO maps are often bumpy and are sometimes impassable, especially in forest areas after the heavy winter rains.

Make sure you hire a 4x4 vehicle as, although it's a local joke that "hire cars go anywhere" as far as tourists are concerned, the joke will be on you if you break the sump on your hire car and have to pay for the damage!

Tip 4: Not all the tracks in remote areas such as the forest or the Akamas peninsula are shown on maps of Cyprus, even the great Selas maps I mentioned above.

Expect to get lost if you are a keen explorer, or consider hiring a guide if you are planning to cycle or hike in the remote forest areas.

Tip 5: Google Earth is an excellent resource and the scale of the satellite image for Cyprus is much better than other places in Europe when it comes to remote tracks.

The only problem with using Google Earth in the forest areas is that you lose sight of the tracks underneath the dense foliage!

Your mobile phone could be your best Cyprus Map

With modern technology, many people will simplay use their smartphones wth a suitable app like Google Maps or Maps.me to navigate their way around the island.

But having tried this method on my travels over the last few years, the biggest problem in using a mobile app for navigation is a flat battery after a short time! So having a paper copy of a good Cyprus map is a MUST too.

Back to Cyprus Facts from Cyprus Map