Review of the Viklari Last Castle and why it's a must-do on a visit to Paphos in Cyprus. 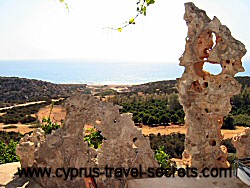 Cypriots love grilled and barbequed meat and pork souvla is synonymous with outdoor summer cooking here in Cyprus. In the searing heat of July and August, you will be tempted by the mounthwatering aroma wafting from a barbecue, packed wth sizzling chunks of pork, chicken or sometimes lamb.

The Last Castle serves the best souvla I have tasted anywhere on the island. You may think it's easy to cook pork by slapping a skewer packed with chunks of meat ono a BBQ, but believe me, if it's not done properly with the correct amount of coals, at the right height and for the right amount of time, you can end up with dry and burnt or conversely undercooked meat.

At the Viklari, the menu is simple - BBQ pork or chicken served with a bowl of salad and giant potato wedges or baked potatoes for the health conscious. Simple yet oh so yummy - the meat really melts in your mouth and is moist and tender.

If you can't eat it all, ask for a doggy bag as it tastes just as good the next day, even the wedges!

Tip: While you really need to be a carnivore to appreciate the wonderful souvla at the Viklari Last Castle, they also do a lovely fasola dish (bean stew) which is great for vegetarians and also fish IF you book both these dishes in advance. 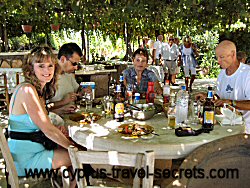 The best souvla is even more delicious of course in the right setting and the Viklari Last Castle is set on the edge of the Akamas peninsula with stunning views and a cool breeze that blows as you sit and munch beneath the grape vines that provide shade on even the hottest day.

While you can just turn up and try to get a table, if your group is bigger than 6 people, you really need to book, especially if you want one of the long tables with the best views.

I love the decor there as I reckon they based the design on the Flintstones - long slabs of rock are used for tables and all kinds of weird rock shapes adorn the balcony area making for great camera shots from the Viklari Last Castle.

If you want to sample the Viklari and taste traditional Cyprus food in an amazing location, be warned that you really need a 4x4 to get there as the track that leads up to the taverna and the Avakas Gorge, which is beneath it, is extremely rough.

Many people park at the bottom at the bottom near the beach, but it's a 300m walk up to the Last Castle - not recommended on a hot summer's day!

Back to Cyprus Restaurants from Viklari Last Castle