Where to buy unusual spices from Asia in Cyprus. Forget the supermarket and visit an Asian spice store for great value spices from around the world. 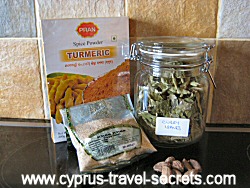 Some of my favourite Indian Spices

I've been a fan of Asian food, especially Indian food, for many years, but living in Cyprus has proved something of a challenge when trying to get hold of spices that aren't commonly used in either Cypriot or European cooking.

I've used online spice stores like Seasoned Pioneers, but you have to order a fair amount to get free delivery and even they don't stock some of the less common unusual spices used everyday in Indian cuisine.

There is a small Indian store in Limassol with a limited range of spices, but recently a friend told me about a shop in Paphos that sells everything from curry leaves and white poppy seeds to black cardamom and asafoetida (a foul smelling powder commonly added to lentil and bean dishes to prevent flatulence)!

The Asian spice shop in Paphos is called Ruposhi Bangla and it's located on Tomb of the Kings road opposite Ben's Bar and diagonally opposite the Roman hotel.

TIP: Sadly the spice shop above has now closed...BUT I have found another one in Paphos so read on to find out more!

The new spice store I found in Paphos recently has actually been in business for many years and is used by many local restaurants offering Asian food.

I don't think it has a name and it's a bit hard to find, but the shop stocks lots of hard-to-find unusual spices including black cardomom seeds, curry leaves and large packs of unseeded tamarind as well as great value packs of mung dhal, bengal gram, red lentils and low-priced cashew nuts.

In addition, they stock loose rice in big sacks including red rice which is super healthy and very cheap. You do have to rinse it well, but I've been using it in all sorts of dishes from Indian curries to making dog food with mince and vegetables and I've even tried a risotto using the red rice which tastes wonderful as it has a slightly nutty flavour.

It's located just off the Mesogi road - take the first right after Eden supermarket as you come up the hill, then the next right and the spice shop is on your right.

I like to use black cardomoms which are unusual spices as a few years back, I wanted to make a new spice mix called black masala from Anjum Anand's fabulous cookery book Anjum's New Indian. I've cooked just about every recipe from her first book Indian Food Made Easy, and I'm now working my way through her second book.

Tip: If you love Indian food but you think it's really hard to make, buy Indian Food Made Easy. You will not believe how super easy it is to make mouthwatering Indian dishes in minutes. The secret is in using an array of unusual spices.

How to Cook with Indian Spices

The best way to learn how to cook with unusual Indian spices is first to get inspired by watching cookery programmes like Indian Food made Easy and then to go out and buy yourself an easy-to-use Indian cookery book like Anjum's New Indian.

You then obviously need to get hold of some of the more unusual spices you won't find in the spice section at the supermarket. If you don't live in Paphos (!) or near an Asian store elsewhere in the world, there are many online stores and Anjum's book suggests plenty of websites to try to find exactly what you need.

The best way, in my opinion, to make Indian food is to grind all your spice mixes from scratch, pre-roasting any whole spices to release their aroma. It's time consuming but very therapeutic!

Tip: To save time, invest in a cheap coffee grinder which you can use to grind up unusual spices mixes. Be sure, however, to label it as a spice grinder otherwise your coffee will taste a little strange!

How to Pickle Caper Berries and Leaves

Back to Cyprus Food from Unusual Spices