Cyprus wines are not well known outside of the island yet Cyprus is one of the oldest wine making countries in the world.

NEW: Book a wine tour in the Paphos region. Transport and lunch included. Just contact me for more information 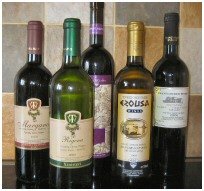 Archaeological discoveries date production back over 6000 years. Yet Kypros has scant recognition for producing quality wines.

Until 15-20 years ago, much of the wine produced was of poor quality, which varied wildly from year to year due to poor production techniques. Some of the local grapes like Mavro could not produce good wine when used alone and, if kept longer than 3-6 months, wine was undrinkable.

Some of the "village wine" still produced today is a reminder of that poor quality. Plus the BIG producers like Sodap and Keo sell cheap carton wine made from the dregs of the wine making process - many expats drink it as it's so cheap but I personally think life is too short to drink crap wine!

Beware of drinking too much of any of the cheap Cyprus wines as they will give you a terrible hangover!

But since the early 2000s, good quality winie is now available here thanks to new varieties of grapes being planted and the introduction of modern wine making plants. Whilst the journey has really only just begun still, Cypriot wine is slowly making its way along the path to good quality, nurtured carefully by the dedication and love of winemaking of the owners of small and larger wineries alike.

Xynisteri - white and most widespread white grape used. Produces fresh light-coloured wines which need to be drunk whilst still young.

Mavro - the most widespread grape planted in Cyprus, meaning "black" but ironically producing a brownish red poor tasting wine when used alone. Must be mixed with other varieties.

Maratheftiko - red variety producing an intense robust flavour totally unique to Cyprus. Far less productive than the Mavro ( must be planted in mixed viineyards to produce any real volume) so more expensive but well worth the price for one of good quality.

Carignon Noir - the most planted imported grape which produced high yields but is bitter and lacks substance - a hangover of quantity rather than quality.

Cabernet Sauvignon - Widely used alone and mixed with other varieties.

Mataro - Another variety favoured by many winemakers as a complement to local varieties.

Tip: My latest wine discovery is not local to our area. I have fallen in love with the Cyprus wines from Tsiakkas Winery high up in the Troodos mountains. A bit more expensive than the Paphos wines, it is worth every extra cent!

Book a hire car for your wine tour

Food and Drink in Cyprus

Quality wine from the Tsangarides winery

Back to Food and Drink from Cyprus Wines