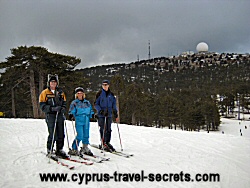 Many visitors are surprised to discover that you can actually SKI here in Cyprus on the Troodos mountains, just below the highest point at 1900m.

Okay, the ski season isn't exactly long and you have to be a little lucky to visit at just the right time for perfect snow, but if you actually live on the island, you can just watch the weather forecast and head for the hills to ski Cyprus after a heavy dump of snow.

Better still, just keep an eye on the Troodos web cam to get a slope side view of the "live" snow conditions. 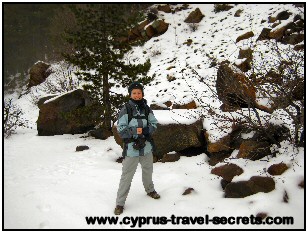 Troodos in the snow

It can snow anytime in the Troodos mountains from early December through to April, but the best ski conditions are usually from mid January through to mid March. It is rare to get sufficient snow to ski before then.

In 2007, it snowed early in December and we were able to enjoy some hiking in the snow (see opposite picture) but there was insufficient snow on the slopes for anything other than tobogganing!

We did, however, manage a ski two years later - see picture at the top of the page.

There are four main slopes in the Troodos to ski Cyprus, all situated close to Mount Olympus and each slope has it's own ski lift.

The ski and hire shop is located in Sun Valley, underneath the Aphrodite slope.

There is also a cross country ski track if you don't fancy downhill skiing.

Tip: The snow melts far quicker on the south facing slopes, so always check the web cam. Just because you can't see snow by looking up towards Troodos (to the south side), doesn't mean there isn't any there!

Tip: Make sure your vehicle is up to coping with slippery, snowy conditions. A 4x4 is really a minimum if it is snowing in the Troodos and, ideally, snow chains are advised, although most people don't have them...the cause of the traffic jams on a snowy day!

If you fancy a ski, just head up to Troodos square then onwards up to the ski hut just under Mount Olympus.

You can opt for a full day or half day lift pass (the half day option is only available in the afternoon to give the ski schools more space). To be honest, the half day pass (3 hours) is more than enough as the slopes are really short, unless of course ALL the lifts are open and you plan to try all the different slopes.

Have fun in the snow and swim in the sea afterwards if you dare!

And if there's no snow to ski Cyprus, hike one of the many beautiful nature trails instead:)

Tip: It really helps to have a nature trail route guide like the Rother walking guide for Cyprus, my most used book since coming to the island, so you don't get lost!

Back to Cyprus Mountains from Ski Cyprus