How to Keep Chickens

Learn how to keep chickens in your own backyard in Cyprus for healthy farm fresh eggs every day. 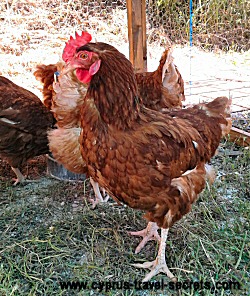 After 8 years here in Cyprus, we've finally decided to take the plunge and get some chickens. While the financial crisis here in Cyprus is one factor, Al and I have been meaning to keep chickens for over a year.

If you've never had chickens before, there is a bit of a learning curve, so the first thing we did last year was buy a fabulous little book called The Right Way to Keep Chickens by Virginia Shirt.

This gave us all the information we needed on how to keep chickens, from designing and building a home for the hens, what to feed them on and how to keep them happy.

After all, a happy hen is a good layer! 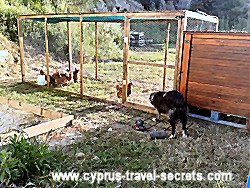 My husband Al spent a few days looking at chicken coop designs, then he put together a large box design made from old bits of tongue and groove wood we had lying around.

He cut a hole on one side for the nesting boxes which were also made from the same wood, then made a drop-down ramp for the chickens.

The coop was then oiled and painted and two perches were added inside for the chickens to roost at night, as recommended in the above mentioned Right Way to Keep Chickens book.

Tip: I suggested he used small pieces of wood on the ramp to make it easier for the chickens to get down from the coop. That was my contribution to the design stage!

We then popped down to the Coop store to buy chicken wire mesh and some cheap wood from the woodstore to make a chicken run. The chickens will be free ranging during the day, but need a secure place to roost at night and the run will keep them safe from foxes and other predators, not to mention keeping the rats out who might take a fancy to the eggs!

It took a few days to put the run together and tack the wire mesh onto the wood, but I think the result is pretty good.

Backyard Chickens - How to Keep Chickens in your backyard!

We then had to find some chickens! While a friend had got hold of some pullets (8 week old chickens), we wanted some older birds around 12 months old who were already laying, saving us time and money on feed while waiting for them to get old enough to start laying.

We went off to Argaka to buy some chicken feed at the local mill (where they grind down wheat, barley etc into animal feed) and asked where we could get chickens locally. One phone call and 5 hours later, 10 chickens were rounded up for us and we were proud new chicken owners.

We took them home in two cardboard boxes and put them into their new run. 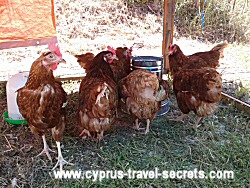 Of course, the first thing we did was feed the new chickens. We had already purchased a metal feeder and a bell-type water dispenser, so put 3 scoops of chicken feed into the feeder and they started pecking straightaway.

In the morning, we were rewarded with 4 huge brown eggs with strong shells, so it was omelette for lunch.

That was a week ago and I've been feeding the chickens lots of vegetable leaves like beetroot leaves and stalks as well as their milled "mash." We've had 8 eggs some days, with an average of 6 a day over the first week. So it's been a success so far.

I thought it might be a huge learning curve on how to keep chickens, but provided you prepare properly and have your coop, chicken run, food, feeders and water dispenser ready, it's really quite easy.

Of course, we haven't had difficulties like health problems yet!

Tip: Just don't forget to get hold of a decent how to keep chickens book like the The Right Way to Keep Chickens.

Related Pages to How to Keep Chickens for Self Sufficiency:

How to pickle Caper Berries

Back to Cyprus Food from How to Keep Chickens