There are many Cyprus museums across the island. The biggest ones with lots of archaeological relics are in Nicosia. 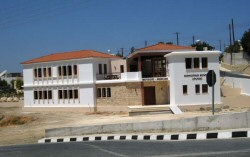 But a true secret gem of a museum is right here on the west coast of Cyprus and it is a wonderful example of old village life in Cyprus.

Designed, built and dreamed of for many years, it is the brainchild of the mayor of a tiny but beautiful village called Steni situated about 10 minutes out of Polis.

The Steni Village Life museum opened its doors in August 2008 and houses a wonderful array of village implements, clothing, weaving machines and life like examples of how the locals lived many years ago. 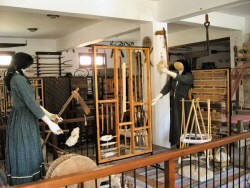 It takes up around a third of the new Culture Center which also houses a conference room, the doctor's surgery and the mayor's office. The mayor, by the way, is called a Muktar in Cyprus.

Many of the old crafts are still practised by the older local women and the museum plans to organise Cyprus art and craft fairs to keep the old traditions alive and offer visitors the opportunity to buy a true piece of Cyprus art rather than a cheap imported statue of Aphrodite from China! 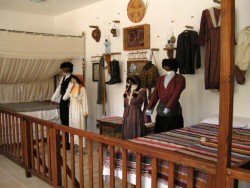 The Muktar is called Elias and his family and friends have donated all the pieces in the museum. It is beautifully laid out and Elias is rightly very proud of his achievement.

His office is above the museum and if you call in, he will tell you lots of unique Cyprus stories like the tale (literally!) of how the crafty locals made money out of selling rat's tails to the government.

Paid by the tail (as rats were a huge problem in the area many years ago), locals realised that the roots of a certain plant looked exactly like a rat's tail, so gathered them up to reap the benefits...until the government asked them to bring a tail with two legs attached!

PLEASE make an effort to visit this very special place. It is truly one of the best museums in Cyprus and a great thing to add to your "things to do in Cyprus" list.

NEW - the amazing Akamas museum in our local village Droushia.

Tip: In July 2020, the brand new Akamas museum opened in Droushia village. Covid-19 means that not many visitors have been able to see it yet, but we've been up to take a look and it is another MUST-DO on your list of things to do in Polis.

Back to Cyprus History from Cyprus Museums