Travel on Cyprus buses as a cheap method of transport. Find bus routes and timetables for intercity, urban and rural buses in Cyprus.

There are no trains in Cyprus so unless you hire a car or take a taxi, the only means of alternative transport on the island is to catch a bus.

I've never actually used the buses here in Cyprus, but there is a very good service that covers most of the island linking the main towns and also the rural villages around the main towns.

There are various different bus companies that operate in the main towns of Larnaca, Limassol, Paphos and Nicosia. These companies, such as OYSPA in Paphos, also operate the rural bus services linking villages and smaller towns like Polis to Paphos.

The public transport buses here in Cyprus consist of either intercity buses linking the major towns or town/rural specific buses for a particular area.

Fares for Cyprus buses are very cheap starting from just €1 for a single ticket for an adult dropping to only 50 cents for students. Children under 12 years old travel FREE, as do military personnel, pupils with a school pupil card or people with a Cypriot social card.

If you want to travel from Polis to Paphos for example, it will cost just €1 each way. What a bargain for a journey that takes a whole hour!

Tip: When travelling to Paphos, the main bus station in Pano (upper) Paphos is called Karavella. If your final destination is on the coast at Kato (lower) Paphos, you will need to take another bus "downtown" or walk, so always leave enough time to plan your journey.

Many tourists use the bus as a cost effective means of transport to get around the island. In the last two years, airport bus shuttles have also been introduced linking Paphos and Larnaca airports to the main towns, much to the disgust, it has to be said, of the taxi drivers who continually complain and try to charge unsuspecting tourists more than they should by not using their meters and adding at least 50% to the normal fare at the end of the journey! 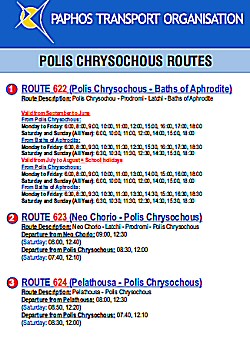 You can also find a table of fares for each route as well as the relevant bus number - very important when getting on at a central bus station with lots of different buses!

It may take a bit of perseverance to find what you need on the Cyprus by Bus website as first of all you need to search by route type, split as follows:

Tips on Driving in Cyprus - Age Restrictions and more

Back to Cyprus Transport from Cyprus Buses