Discover the best Cyprus beer on the island, real ale brewed in Cyprus at the new Aphrodite's Rock brewery company.

When people ask what you miss about living in the UK, not being able to watch live Welsh rugby at the Millenium stadium is the only thing I really miss. Al, my husband, always says a pint of real ale!

Lager is cooling in the hot summer months especially, but Keo, the island's main Cyprus beer, gets a bit dull after a while, not that I drink the lager - it's far too gassy!

While you can buy beer like John Smiths in many pubs and bars, it's not quite the same as a pint of Tanglefoot - our favourite Hall and Woodhouse beer from Dorset.

So you can imagine how pleased we both are that a new brewery has recently opened right on our doorstep in Paphos, brewing a range of both International and English-style beers in the traditional way, just as CAMRA like it.

And the brewery is called Aphrodite's Rock Brewing Company.

We recently went for a tasting in Tsada and came away with 6 bottles of various styles of Cyprus beer. Included in the range are English-style best bitters, both dark and light at 3.8% ABV, a red Irish-style ale called Lian Shee which is 4.5% ABV, the Hobnob brown ale, also 4.5% and two strong 6% beers, the German-style Liberator and the American-style West Coast IPA.

We also got some great glasses to drink the beer from!

As the beer is fresh you need to store it upright in the fridge for 24 hours to let the yeast sediment settle, then get in and drink the amber nectar.

Tip: This new Cyprus real ale is also available in draught and bottle from many bars and restaurants in the Paphos area including O Niro's near the rocks at Coral Bay, one of our favourite haunts. 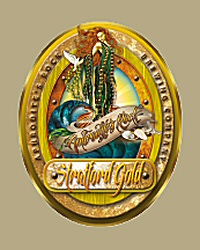 The Aphrodite's Rock Cyprus brewery is located just off the main Paphos to Polis road (the B7) at Tsada.

Tasting is free available Tues/Wed/Thurs between 11.00-15.00 every week. You get to try a small draught sample of the various beers, then you have the dilemma of which beers to choose to buy! This fabulous real ale Cyprus beer is available to buy in half litre bottles and six bottles cost just over €17. When you take the bottles back, you then get a discounted price.

You can also buy your favourite tipple in keg form starting from €40 for 10 litres for the 3.8" beer. Perfect for parties!

Tip: The grand opening of Aphrodite's Rock brewery took place way back in October 2013. Since then a tasting visit has become one of the most popular things to do in Paphos on Trip Advisor, so do phone them if you want to visit to avoid disappointment! Tel: 26101446 plus check out the Aphrodite's Rock Trip Advisor reviews for more information.

So if you have been thirsting for a pint of real ale freshly brewed right here on the island, head on over to Paphos to taste some great Cypriot beer.

How to Pickle Caper Berries

Back to Cyprus Food from Cyprus Beer