Looking for cheap hotels in Paphos for an affordable sunshine holiday on a budget? Here is my pick of the best budget hotel accommodation in Paphos.

Quick search for all cheap Cyprus hotels in Paphos. 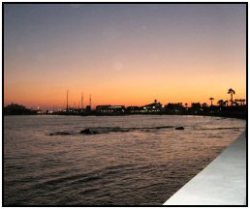 Paphos is one of the most popular resorts in Cyprus and has a vast range of hotels from the most luxurious spa resorts to tiny family run establishments.

With its proximity to the Middle East at the far end of the Mediterranean, the island enjoys over 320 days of sunshine per annum.

For many visitors, a hotel is simply a place to rest overnight while spending the best of the day exploring the island, so cheap hotels in Paphos are an economical way to plan a holiday.

I know I would rather spend my money on good food, exploring and doing fun activities like watersports or mouontain biking, rather than forking out for a luxury room and access to a posh spa. So if you're like me, then read on.

Click on the links below to confirm availability, get reviews from travellers who've already stayed there and the best deal on prices. 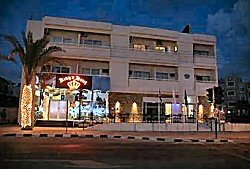 From only €25 per night for a double room, the Kings Hotel offers incredible value for money. Situated only a few hundred meters from the famous archaeology site, the Tombs of the Kings, this two star hotel has a wealth of facilities including a large pool, sauna, jacuzzi, fitness room and large screen satellite TV.

Guests are offered free entry to other Paphos attractions and have a wide variety of bars, shops and restaurants within a few minutes walk. 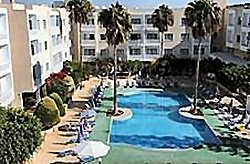 The four star Mayfair hotel and apartments is situated between the old quarter of Paphos and the new quarter, known as Kato (lower) Paphos.

In a quiet location close to the old Carob Mills, this hotel boasts a superb pool/garden area in lush surroundings and suits older residents and families alike. From €30 a night.

Facilities include a kids pool, a business centre and tennis courts and if you're travelling with a family in tow, there are good sized rooms geared towards the requirements of families and kids with TV, a safe, private bathroom, AC as standard plus tea and coffee making facilities and complimentary toiletries. 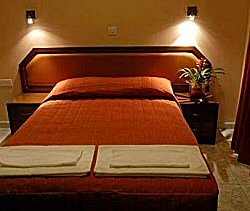 Budget hotel seekers wanting a location close to the beach should consider the charming Pyramos hotel.

A tiny family run hotel with only 21 rooms, the Pyramos exudes sophistication despite its one star status and is beautifully decorated throughout.

With prices starting from a mere €26 a night and only a few meters from the beach, it is excellent value. The only slight drawback is its proximity to Bar Street which, as the name implies, is full of noisy revellers in high season. But Bar Street is being renovated and many of the bars relocated, so this will not be an issue from mid summer 2014. 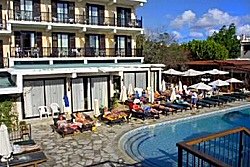 An alternative choice for a central location in Kato Paphos is the Dionysos hotel. With 100 rooms and a three star status, facilities include a pool, fitness room, restaurant and guest parking, a rarity in a hotel smack bang in the middle of the main tourist area.

Friendly personal service is the hotel's speciality and many guests return year after year attracted by prices from €40 a night for a twin room.

The rooms at the Dionysos Central have a safe, cable / satellite channels and a TV. Each room also offers a telephone, a refrigerator and an iron. 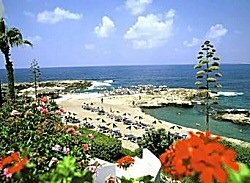 For those in need of pure relaxation in a resort style hotel without a high price tag, consider the three star Cynthiana Beach from €50 per night.

Situated on the coast 8km north of Paphos, the hotel lies in a tranquil, picturesque location and offers guests a large pool for relaxation, a gym, sauna, tennis courts and a private beach with a man made lagoon.

Guests have the option of dining at the hotel or sampling one of the many excellent restaurants in the Coral Bay area, only a few minutes drive away.

See the links above for traveller reviews and tempting pictures of the fabulous interior, indoor pool and much more.

Budget conscious travellers can get great last minute deals to many cheap Cyprus hotels in Paphos, especially in low season from end November to end March.

My pick of cheap hotels in Paphos above offer year round low prices so visitors can afford a sunshine break at any time.

Back to Hotels from Cheap Hotels in Paphos