Read my recommendations on the best Paphos hotels from 5 star luxury resorts to great value all inclusive hotels in beautiful western Cyprus.

Get a great deal whether looking for an all inclusive package or just a few days spent relaxing in a luxurious spa hotel.

Quick search all hotels in Paphos with just one click. 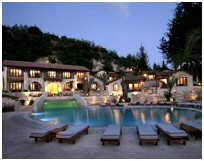 Paphos is one of the most popular holiday resorts in Cyprus with a wide selection of accommodation and restaurants to suit every taste and budget. Based on the west of the island, it is the best place to enjoy spectacular sunsets from one of my recommended hotels in Paphos.

Whilst Paphos itself does not have a great beach, most of my recommended hotels in Paphos have their own stretch of coastline within the hotel grounds - perfect for relaxing by the pool, sipping a cocktail and watching that spectacular sun go down.

Tip: get away from it allin pure luxury at the gorgeous Ayii Anargyri Natural Healing Spa Hotel 25 minutes from central Paphos.

Click on the links below to find more about each of my hotel recommendations, to confirm availability and price and to book direct.

Completely renovated in 2008 to upgrade both the hotel and spa, the Almyra is the sister hotel of the Anassa (in Latchi/Polis) and the Anabelle (situated next door).

Situated in 8 acres of lush gardens right on the beach, the hotel is ideally placed in central Kato Paphos to enjoy restaurants, bars, the harbour and all main attractions only a few minutes walk away.

Perfect for a luxury holiday break or even for business.

Sister hotel to the Almyra where guests can make full use of the Almyra's spa, the Anabelle has 218 luxurious rooms over 4 floors in beautiful grounds adjacent to the beach and overlooking Paphos harbour.

Famous for its organic food served in one of 4 restaurants, the hotel has an enviable reputation for cuisine. Amenities include tennis courts, fitness centre, full internet access, massage and beauty centre, mini golf course and luxury rooms with own balconies, mini bars, fridges and bathrobes.

My verdict: The Anabelle is one of the best 5 star Paphos hotels.

Recently renovated, this most luxurious of Paphos hotels is highly popular as it has a policy of no children under 16 - great for couples!.

Situated 8km from Paphos harbour in the Kissonerga area the hotel has its own stretch of beautiful sandy beach and is situated well away from the noisy bar areas in central Kato paphos or Tomb of the Kings road.

The hotel also boasts a nightly entertainment programme second to none in the area so you really don't need to leave the Atlantica Beach at all. 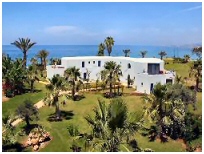 Situated in central Paphos within its own lush grounds, this fabulous hotel is part of a triple "boutique" hotel complex.

Combining sophistication with luxurious privacy, the complex is west facing allowing superb sunset views and the internal hotel decor is quite sublime.

It's the perfect place to relax and unwind. 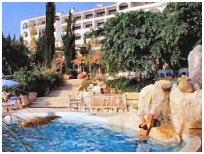 Lying on the edge of the Akamas peninsula overlooking beautiful sandy and palm tree-lined Coral Bay, this luxurious hotel boasts no less than 6 restaurants and has an Olympic size swimming pool.

The spa and healthclub plus tennis courts together with watersports on offer make this an ideal hotel for sports orientated visitors.

I love it as it's well away from central Paphos which is too busy in high summer and if you love strolling along the water's edge, sea caves with all the fabulous rock formations are only a short walk away. 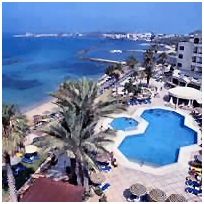 This popular hotel has its own blue flag beach and is well situated in central Kato Paphos, only a 10 minute walk from the harbour.

Its award winning interiors are sure to please as will the choice of food in one of its tasty two restaurants, one of which has recently been upgraded and is receiving rave reviews!

Relax, unwind or use the health club and gym.

If you like quirky places, then this is one of the most unusual Paphos hotels! Situated close to the main archeological sites in Paphos together with some of the best restaurants nearby, the Roman hotel stands out with its highly original decor both inside and out.

The hotel was built on grounds where some of the famous tombs were found and its interior has to be seen to be believed.

Great for a winter break too as it has a heated outdoor pool! 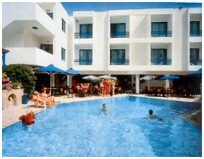 Positioned in an enviable location, close to the centre of Paphos, this hotel is family friendly and is great value for money. Close to all shops, bars and restaurants, there is a choice of either hotel rooms or self catering apartments which surround the two pools.

The owners will give you a warm welcome at the Nereus.

The best deals to Paphos hotels can be found in low season months, typically from March to end May and October-November.

But it is also possible to get a cheap Cyprus holiday by shopping around in high season too.

Take a look at my tips page on how to find a cheap holiday in Cyprus.

Check out prices on all hoetls in the Paphos area with just one click.

Where to Stay in Cyprus

Hotels in the Troodos Mountains

Back to Hotels from Paphos Hotels