Want to know which Cyprus snakes are dangerous? 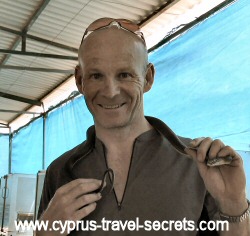 Don't be afraid of snakes!

Having "met" many snakes since living on the island, including an enormous viper that nearly devoured our rescue pup Rocky, we've grown to love these beautiful creatures, despite the fact that they can be dangerous.

There are 8 different kinds of snake in Cyprus and, while most people are scared, if not terrified, of them, there is really nothing to worry about so long as you have a good understanding of their habitat and you are sensible when walking about in the great outdoors.

We see them frequently when out cycling or walking, but numbers are declining, partly due to people killing them through fear and partly due to the natural environment and other predators.

Snakes are actually beautiful creatures and a wonder to see as an important part of wildlife in Cyprus. Graceful and elegant, they can move quickly but provided you are not being stupid, like walking around in dense undergrowth wearing flip-flops, you are unlikely to step on one as they are sensitive to vibrations from 15m away and will most often move out of your way before you see them. 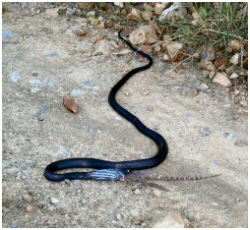 This picture shows a large whip snake having its lunch. The picture was taken over 14 years ago when we had just arrived on the island.

Sadly we have never seen one this big since as the large whip snake is constantly being slaughtered by the locals and, in turn, this is leading to an increase in the blunt-nosed viper, one of the delicacies favoured by the whip snake.

If you visit Cyprus in May, you are far more likely to spot a snake as it's mating season! 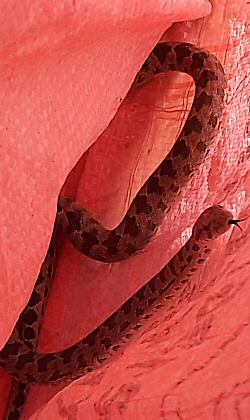 Viper caught in our garden
Actually a coin snake, but looks similar!

Update May 2020 - The Covid-19 lockdown seems to have benefitted the local snake population! We have seen many more vipers and whip snakes on our short cycle rides and dog walks over the last few weeks. I supect this is due to the lack of cars on the road as many get run over by vehicles.

As I have said, there is no need to worry too much, though if you do see a snake in your garden, just try to remove it humanely rather than smash a shovel over its head like many locals do!

Tip: Many locals like to run over snakes in their cars as they believe all snakes are dangerous. If you see one on the road, PLEASE slow down - it's much better to see them from the safety of your car!

Most people are scared of snakes as they fear they are all poisonous. There are 3 poisonous snakes in Cyprus but you only need to be cautious when you spot a blunt-nosed viper.

Here are the 8 Cyprus snakes:

Blunt-nosed Viper - Distinct markings of large spots on either brown or grey skin depending on age and with a characteristic spade-shaped head. Poisonous and moves more slowly than other snakes. Commonly found near river and stream beds.

Montpellier - also poisonous but moves very quickly so you are unlikely to be bothered unless actively looking for one! Brown in color and can grow to 2 metres in length. Hisses loudly if threatened.

Cat Snake - last of the poisonous Cyprus snakes. A small snake with back fangs so you can only get bitten if you put a finger down a cat snake's throat! Long thin body with either beige or brownish-green color with square-shaped markings in a diamond pattern.

Coin Snake - Harmless to humans with beautiful "coin-shaped" markings that mean it is often mistaken for the viper! One way to distinguish the coin snake is to look for a long thin tail and a glistening sheen on the skin.

Cyprus Grass Snake - re-discovered by Snake George in 1992, it is still rare and endangered but also harmless. Color can be light to dark brown and the snake can grow up to 1 metre.

Cyprus Whip Snake - the only endemic reptile in Cyprus. When young, it is pale pink then changes to olive-green then black after about 2.5 years. Has a long thin tail and a small head.

Large Whip Snake - the most common of the Cyprus snakes although the locals are intent on killing every one they see! Olive green while young it eventually turns blue-black and is stunning to see when moving quickly. Eats the viper which is why you should NEVER kill a large whip snake!

Worm Snake - as the name implies, this snake looks more like a large worm but can grow up to 30cm and is either pink or beige. I've never seen one or at least if I did I probably thought it was a worm! Only seen at night as sunlight would kill it.

Tip: If you see a snake looking "dead", especially in shady spots like dense forest, always approach with care. They like to take a nap from time to time and won't appreciate being awoken with a start!

Now you've read all about them, you don't need to be so scared of our wonderful Cyprus snakes!

Have fun when out walking, spotting the local wildlife:)

Back to Cyprus Walks from Cyprus Snakes

Back to Cyprus Travel Secrets Home from Cyprus Snakes