Catch up with the headlines on the Cyprus latest news from January 2013.

Cyprus Teetering on the Brink of Bankruptcy

It's been a tough year economically for Cyprus and the hot topic for once has not been how to solve the Cyprus problem of a divided island, but how to get out of the financial mess, triggered by the Mari bomb explosion back in July 2011.

In June, the Cyprus government appealed for aid to bail out the Cyprus Popular Bank (Laikie) and since then, has been negotiating with the so-called Troika, the European Union, the European Central Bank and the International Monetary Fund, on the terms of a bail-out.

Sticking points have been the inevitable harsh austerity measures imposed by European partners which the Cyprus government has tried to avoid. They tried to borrow more money from the Russians instead, but requests fell on deaf ears.

Reported figures as to how much Cyprus actually needs for a bailout are in the region of €17.5 BILLION Euros. But many people in Cyprus believe the real figure required could be much higher as the banks have lent vast sums of money to property developers over the last 10 years and many of those may now go bankrupt as the recession deepens and the banks have no money to extend their debt any longer.

As terms have not yet been agreed, the country is literally teetering on the edge of bankruptcy and has had to borrow money internally from major companies like the Electricity Board to pay debts and wage bills for December.

In my 8 years living on the island, I've never experienced a really wet December before. But this year (2012), all I can say is that the monsoon arrived and it rained and rained and rained. So much so that over 50 million cubic metres of water flowed into our water reserves, 10 times more than last year!

By the middle of the month, many of the island's reservoirs overflowed, for the second time in 9 months - heavy rain last January led to all reservoirs overflowing by the middle of March. While this is all great news for our water reserves, the sheer volume of torrential rain has carved huge holes in many tracks, caused numerous mud slides and damage to property. And winter has only just begun!

If you plan to venture into the mountains on one of the forest trails early in 2013, do so with caution as the forestry department are unlikely to be able to repair the damage soon, especially as the rivers and streams flowing down from high points are in full flow.

Still, at least the rain stopped for Christmas and we managed a morning swim in brilliant sunshine. 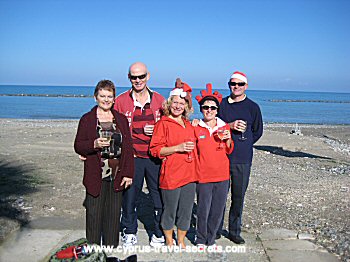 Several towns in Cyprus cancelled their New Year celebrations in 2012, in recognition of families facing extreme hardship in the current depressed economic climate. In the capital Lefkosia, authorities decided to give the money set aside for any celebrations to 200 needy families who are struggling to feed their children on a day-to-day basis.

In Paphos, the New Year budget was given to local parent-teacher organisations to help similarly desperate families who have resorted to begging on the streets of Paphos.

Last week Orphanides, one of the biggest supermarket chains on the island, went into receivership which will have a knock-on effect on other businesses across the island.

Driving through Paphos, it is now commonplace to see empty shop units and in Nicosia, the main shopping street Makarios Avenue resembles a ghost town as many shops are closed. Most businesses are struggling to make ends meet and cancelling New Year's eve for 2012 marks the start of a harsh 2013 to come.

It's hard to believe how the prosperous country of just a few years ago has fallen into such a sorry state so quickly.

2013 brings yet another fuel price hike with a massive 7 cents going onto the price of both diesel and unleaded fuel. Although heating fuel remains at its previous price of just over a Euro per litre, you can now expect to pay €1.35 to €1.42 per litre to fill up your car, depending on which type of fuel you use. Not the best way to start 2013!

Back to News from Cyprus Latest News Jan13