Catch up with the headlines on the Cyprus latest news April 2013.

Most of you will be aware of the sorry state Cyprus currently finds itself in having been front page news for much of the last month over the country's financial problems, requiring a bail-out from the EU. The original bail-out figure of €17.5 billion euros has now increased to €23 billion and Cyprus has to find the additional money as the Troika will only provide the originally agreed €10 billion euros.

As painful as it is to have to succumb to the harsh demands of the Troika, Cyprus brought this on itself, not helped by the previous government burying their heads in the sand and refusing to act promptly when they originally applied for a bail-out in June 2012.

But will the bail-out even happen? We've all read how the country will go bankrupt if the bail-out money is not given, but the latest from the Cypriot politicians is that they may block the bail-out, having decided to vote on whether or not to accept it along with the harsh conditions attached ie. massive depositor haircuts, drastic downsizing of the island's banking sector and the inevitable shrinking of the economy that will ensue.

Unbelievably, the Cypriot parliament may well vote against the €10 billion euro bail-out, having no idea where to go next. Many people are suggesting that the country should default on its debts, exit the Euro and return to the Cypriot pound, with the chaos that this would bring.

I said last time that 2013 will be a very tough year for Cyprus. It already is and it could get a whole lot worse. But please read on if you are planning your 2013 summer holiday...

Many tourists may be wondering whether it's a good idea to visit Cyprus right now. Will you be able to get money out of the cashpoint machines? Will all the locals be miserable, expecially if they have lost money? Will you get bad service or even no service at all if angry workers decide to protest? Will the shops be short of stock if suppliers have cash-flow problems due to the strict banking controls currently in place?

Well the good news is that, despite the island's current problems, it is very much business as usual for the tourist trade and pretty much everything else. We've noticed a few shortages on some items in the supermarket, but that happens all the time anyway.

Cash machines are full of money and there are no long queues at the bank. While some restaurants may prefer cash as payment, most are accepting cards. And while the mood may be sombre in some places, there is still service with a smile in most shops and tavernas.

So come on over to Cyprus in 2013. The sun is shining, the beaches are waiting and there's a warm welcome waiting in the mountain villages.

Property signs now in Chinese too

If you've been to Cyprus and especially the Paphos area recently, you won't have failed to notice the growing trend of many property signs now being written in Chinese.

Many affluent Chinese families have been buying properties on the island, especially in the Paphos area, including Polis and Latchi. They have been lured by the island's mild winter climate and good standard of living, but there are also a couple of other key reasons why the Chinese are attracted to Cyprus.

First, anyone spending over €300,000 euros on a property can claim Cypriot citizenship, provided they also deposit at least €30,000 in a Cypriot bank. This then gives them free passage in any other European country as they become EU citizens too.

Perhaps more importantly, becoming an EU citizen means they do not have to adhere to the strict one child policy set in China. Any relatives can also apply for citizenship, provided they also deposit a minimum of €30,000 in a bank here. The island is certainly becoming multicultural!

Our local village Droushia now has three hotels as the Droushia Heights hotel reopened last week after many months of renovation and several years of closure. We took a quick tour last week and it truly has been transformed with stylish rooms decorated in a minimalist style, plush carpet in the room corridors and a light spacious bar and dining area plus an outdoor verandah with stunning mountain and sea views. 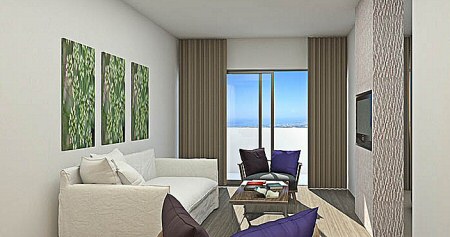 There is a long infinity pool out front and while the plants and shrubs will take time to grow, the hotel is really inviting. A programme of talks are already being planned with the first happening next weekend - a talk about the flora on the Akamas.

If you'd like to see what the hotel has to offer, check it out here.

Back to News from Cyprus Latest News Apr13