The Troodos Massif is a marvel of Cyprus geology.

In geologists' eyes, it is the most complete and studied ophiolite in the world. 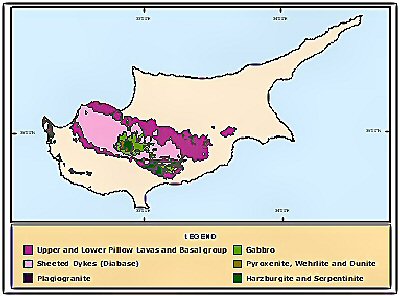 Cyprus was formed as a result of a series of unique events which has made the island a geological show case.

About 90 million years ago, Cyprus was part of the bottom of a deep ocean, called Tethys.

Tectonic movements at that time resulted in the collision of the African with the Eurasian plate, ultimately giving birth to the island.

The Troodos Massif itself first rose above the ocean around 20 million years ago along with its smaller sister in the north of the island, the Pentadactylos range.

Today's high point, Mount Olympus, otherwise known as Chionistra at 1952m or 6400 ft, is actually a slice of a 90 million year old crust of the ocean consisting of plutonic, intrusive and volcanic rocks and chemical sediments.

The complex geological processes which took place to form the island can be clearly seen in the rock formations in the Troodos massif area. Students of Cyprus geology can visit almost any area in the Troodos to marvel at the tectonic layers of rock.

Being volcanic in origin, the Troodos Mountain Range is made up of serpentine-rock, diabase, gabbro and pillow lava.

It is also rich in mineral deposits including asbestos, chromite, iron and copper which probably gave the island its name and certainly made it an attraction for invading powers over the centuries.

And you don't need to be an expert in Cyprus geography to marvel at the incredible rock formations in the Troodos area. Just go for a walk or a mountain bike ride on one of the many nature trails like the Atalante trail to see the amazing variety of rock strata. 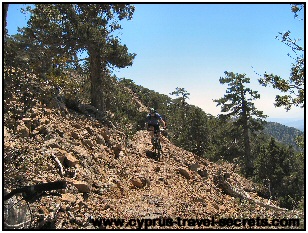 We love the Troodos area as it is very quiet compared to the rest of the island. It is amazing to escape the heat of summer by taking a road bike up there, meandering along the many deserted mountain roads and just admiring the beautiful scenery on two wheels.