Enjoy some cute dog photos of our Cyprus rescue puppy Rocky. How we got our two adult cats to accept him and why you have to be careful walking dogs in Cyprus. 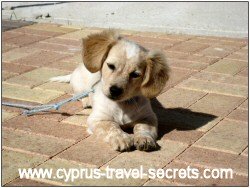 How could anyone abandon such a
cute puppy?

In February this year, Al and I were out riding our bikes through the local quarry when a tiny fur ball literally stopped us in our tracks. Virtually the same color as the quarry stone, he appeared lost but was eager for company and, after coming to me, rather than Al - well I am prettier to look at so he obviously had good taste;) - we couldn't get rid of him.

As we cycled on, he ran as fast as his tiny little legs could carry him and while he managed to keep up on the hill we were climbing, once we started to descend, he fell behind.

And then I heard his cries; as I stopped to look round, he was desperately trying to catch up. I just couldn't leave him as we had cycled onto a short road section and I felt sure he would be knocked over by a car or one of the quarry vehicles.

And so we abandoned our ride and took him home. A call to the dog rescue centre Paws near Paphos airport the next morning asked me to wait 24 hours as they were inundated with other abandoned puppies that day. 24 hours later, I was smitten and the rest is history.

This particular favourite of all my cute dog photos was taken just a few weeks later after we'd searched everywhere for his owner and decided, albeit with major doubts initially, to give "Rocky" - well, we found him in a quarry full of...rocks! - a home. 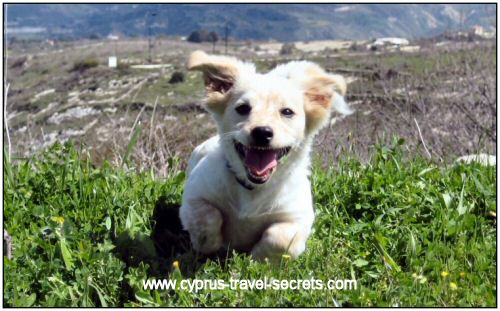 I'm so happy you found me!

If you are looking for Cyprus pets, you don't need to go far to find stray animals on the roadside, many of them starving and emaciated. Thankfully, there are many pet rescue centres around the island, including, as already mentioned, Paws for dogs in Paphos. There is also Paphiakos, a rescue and veterinary centre for any kind of animal and many other rescue centres in other major towns on the island. You can see plenty of cute dog photos on their websites if you are looking to rehome an animal. 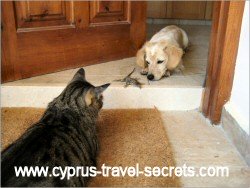 Who's gonna catch it then?

Taking on an abandoned dog is not always easy, especially if you already have cats. I had no idea how to get them used to one another, so I used my instinct and decided to keep them apart for the first few weeks. That worked until Rocky got brave and tried to eat the cats' food. A few swipes from a cat claw put paid to all that!

It helped, of course, that the cats were bigger than him! The next of my cute dog photos on the right may give you an idea of how big my cats are - Rocky is 7 months old in that shot, weighed 7.5kg versus Baz (in the pic) at 7.8kg, and won't grow any taller as he's a small terrier-type breed.

Six months after the Rocky met Bazil and Bengie, they now get along fine. Rocky acts like a cat - well he has no doggie brothers to learn from! - and they have been known to eat from the same bowl - the cats' bowl! And here's photographic proof that while it took time, even feisty Bengie is happy to cuddle up to Rocky when it's cold outside. 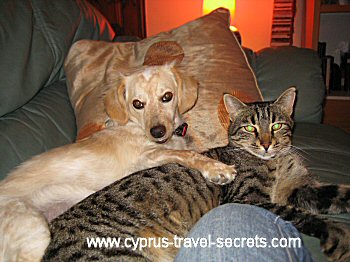 Bengie loves Rocky after all!

Why you need to take care when walking dogs in Cyprus. 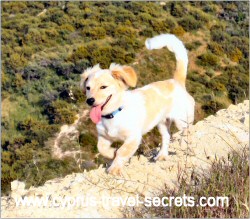 Sadly, many dogs are poisoned here in Cyprus as farmers put down illegal poisons to keep rats and other vermin at bay. It is essential, therefore, if you love your dog, you always carry a poison kit available from your local vet.

It consists of some white tablets, given immediately to make the dog vomit, and a couple of vials of fluid which need to be injected into the animal as quickly as possible. Then take the dog straight to a vet.

We know of medium and large size dogs that have died within 15 minutes of eating poisoned meat or other contaminated products, so I always carry the poison kit in a day-glo bum bag - very stylish! - to remind me to pick it up every time we go walking armed with my camera of course to take cute dog photos.

But enough of sad tales of potential poisoning. Just enjoy more of my cute dog photos below.

I think Rocky is pretty cute as he always get the Ahhh factor from everyone who meets him, not that I'm biased.

But if you think your dog is cuter, then why not send in a picture. Your dog doesn't have to be a Cyprus pup, but I'd love to hear why you think he's cute and add a cool story about how you found him/her.

Your Favourite beaches (for dog walking)