Need Cyprus money for your holiday?

Need more information on the Euro?
See what Cyprus money looks like here

One euro = 100 cents and there are eight euro coins:

Each coin has a national side depicting the history, culture and nature of Cyprus. 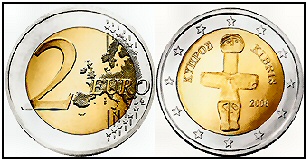 The €1 and €2 euro coins bear the Pomos cross 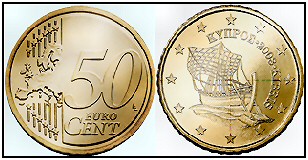 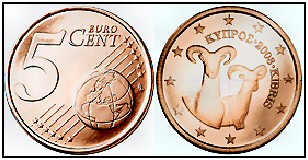 and the small Cyprus money, the 1, 2 and 5 cent coins, carry the famous Cyprus moufflon.

The common side of the coins is the same throughout the EU and shows varying maps of Europe.

Each note has a different colour and size - the larger the amount, the bigger the note. There are no national elements on the euro notes as they are common across Europe. On the front side, the notes show windows and gateways. The bridges on the back of the euro notes symobolise communication between the EU members and the rest of the world.

Currency in Cyprus - Help given to Residents in 2008

Amusing fact: The euro currency has a high level of security to prevent fraud including dual-coloured coins (which are difficult to copy) and multiple holograms/security codes on bank notes.

At the start of December 2007, the euro bank notes started to arrive in Polis. An enormous lorry arrived in the town accompanied by 2 police cars. The bank notes were shrink wrapped on palettes on the lorry and the vehicle visited every bank in the town.

Each palette of notes was cut open and piles of bank notes were transfered into each bank by the driver, with the police keeping an eye on the remaining notes left alone on the back of the lorry.

Just as well that Polis is a pretty safe place to leave so much Cyprus money lying around!