Nicosia (more commonly called Lefkosia), the capital of Cyprus, is the last divided city in Europe. Over a third of the population of Cyprus live in the capital which is a modern busy city much like any other city in Europe, allbeit on a smaller scale.

Find the best hotel deal in Nicosia with just one click

Whilst many business people work in the city, Nicosia is seen as a shopping centre for permanent residents on the island. It is also one of the main places where you can cross the Green Line into Turkish controlled Northern Cyprus. 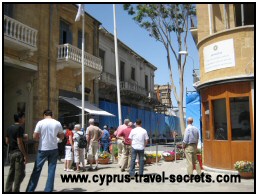 Ledra Street, the main pedestrian walkway in in the capital of Cyprus, Nicosia, used to be a smart shopping area. Today it looks very tired - both the shop fronts and the cafe bars - yet the street is still full on a busy Saturday.

The recent opening of the crossing point in Ledra Street has brought fresh hope for many retailers and cafe owners as tourists and locals flock to Ledra Street to cross into the North.

Best places to shop in Nicosia

Forget Ledra Street if you want some serious retail therapy. Head back to Makarios III avenue where you will find giant sized versions of most major stores like Debenhams, Marks and Spencer, Mango or Zara.

If you are looking for homewares, then a brand new IKEA has just opened on the outskirts of town (take the motorway turning just after the stadium) and alongside it is the MALL, a brand new concept for Cypriots with bright new fashion stores all under one roof.

But if you want old fashioned souvenirs and Cypriot handicrafts you need to go to the Laiki Yetonia within the walled city.

Cool Places to visit in Nicosia

Visit the Laiki Yetonia area (which means local market) which is adjacent to Ledra Street and a whole different world exists. Trendy art cafes and juice bars down side alleys and unsual restaurants like the famous Lebanese Fanous sit beside quaint market stalls and souvenir shops.

You can happily spend a few hours wandering the streets here. 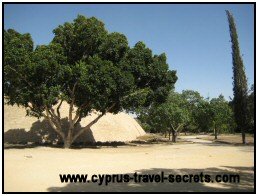 Then head for the city walls built by the Venetians and stroll along the wall through the various municipal gardens. OK, some of the gardens are more like dust bowls in the hot summer months but there is still a cool atmosphere and you really don't think you are in the capital of Cyprus at all.

The last divided city in Europe has been split in two (or rather one third and two thirds) since Turkey invaded in 1974.

When Cyprus joined the EU in 2004, restrictions were relaxed making it much easier to cross into Northern Cyprus and EU citizens now only need to get a stamped piece of paper to cross back and forth from one side to the other.

With the opening of Ledra Street, there are now six crossing points into the North and hopefully, in time, there will also be a crossing point on the west of the island at Kato Pyrgos.

STOP PRESS! The Limnitis crossing is now open as of October 14th 2010! Hurrah!

The rest of the crossing points into Northern Cyprus are here:

We remain in hope that Nicosia, the capital of Cyprus will not remain divided forever.

Find the best hotel deal in Nicosia with just one click

More information on hotels in Nicosia

Return from Capital of Cyprus to Cyprus Towns

Have your say about what you just read! Leave me a comment in the box below.
FacebookTwitterPinterestTumblrRedditWhatsAppMessenger
[?]Subscribe To This Site